4 ingredients to build a culture of dissent 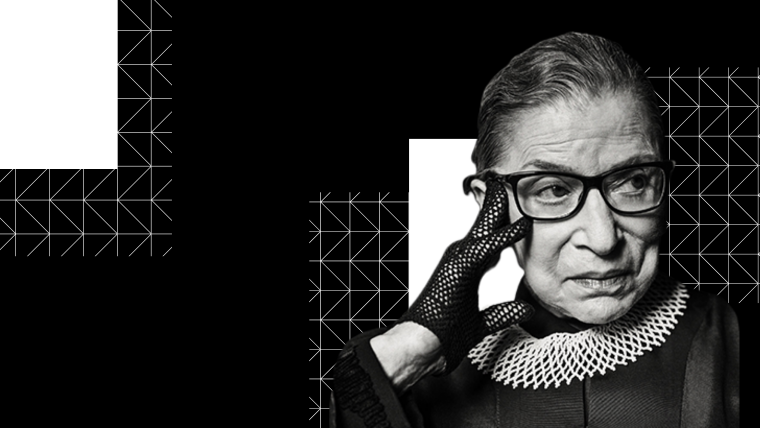 In creative settings where the stakes are high, it is imperative to stimulate debate and criticism to improve the quality of ideas. Dissenting for the sake of dissenting is not useful, but when it is authentic, it stimulates thought. Everyone with a critical opinion should always speak up. Dissenting opinions are useful even when they are wrong, as they clarify and embolden everyone’s thinking.

The biggest advocate for dissent is perhaps the late, great Ruth Bader Ginsburg, who demonstrated throughout her long-lasting, impactful life and legal career, the importance of dissent in a true democracy. Responding to questions about her courage to dissent from her fellow U.S. Supreme Court justices, she said, “Dissent speaks to a future age. It’s not simply to say, ‘My colleagues are wrong and I would do it this way,’ but the greatest dissents do become court opinions.”

Ruth Bader Ginsburg’s unlikely friendship with conservative Justice Antonin Scalia continuously surprised many. Despite their opposing views, they found common ground in their shared love of the opera, bringing them closer together as true friends.

Shana Knizhnik, attorney and co-author of “Notorious R.B.G.: The Life and Times of Ruth Bader Ginsburg,” says, “RBG has always done her best to paint her adversaries’ arguments in the best light, right before she argues forcefully for the opposite position. This does not mean that every argument is worthy of respect – rather, it simply means that we must strive for intellectual honesty, even when it is difficult.”

There’s a reason it’s called common “ground” – it grounds you in a shared purpose, providing a pathway of communication that leads to trust.

I challenge you to: Strike up a conversation with someone you tend to disagree with and try to find something the two of you have in common – whether it’s a hobby, a favorite TV show, or even something you both dislike. Discovering common ground might strengthen your working relationship (and you might even make a new friend along the way!).

Creative solutions often come from combining different and seemingly unrelated ideas – and you’ll only come across different ideas when you have different perspectives in the room.

It starts with whom you surround yourself with. If you want your team or business to succeed, it is imperative that you hire people from diverse backgrounds who bring different perspectives and life experiences to the table.

A THNK alumna working in the Australian government tells me that one of the public sector’s weaknesses is its glaring lack of diversity: “Groupthink can easily become prevalent. A lack of diversity, a dominant hierarchical structure, and inculcation of a set of values and expected norms from the day you step in the door contribute to groupthink. To move beyond groupthink and homogenous thought can be very challenging, to have individuals and teams think differently can be challenging, and to have those thoughts valued and make meaningful change can, at times, be even more challenging. It requires courageous leadership.”

I challenge you to: The next time you need advice from someone, be it personal or professional, don’t ask one of your friends. Instead, try to actively seek insights from someone who you suspect might challenge your point of view. You might find that it opens your mind to new, more interesting, possibilities.

Voicing dissent is not easy. It requires an environment where people feel empowered to be open and vulnerable – especially if they are going against the grain.

Google spent two years studying 180 teams in an attempt to codify the secrets to team effectiveness. During this initiative, titled Project Aristotle, researchers discovered that the most important factor of success was psychological safety: interpersonal trust and respect among team members, allowing them to take social risks (such as admitting failure and asking for help). In order to perform at their best, people must feel safe enough to take risks and to be vulnerable in front of peers.

In an article on psychological safety, THNK Partner Natasha Bonnevalle writes, “The world will always need remarkable and visionary leaders. But by consciously choosing a more inclusive leader, we will be better able to address our collective innovative ability, enabling us to jointly address the issues that keep us awake at night. Perhaps it’s not just about the solution itself, but whether we can be human in that solution: vulnerable, fallible, and without a sense of false control.”

I challenge you to: Host an “Anxiety Party”! Give everyone 10 minutes to individually write down their biggest anxieties. Then, give them two minutes to rank their list from most to least worrying. Next, each person gets to share the anxiety that worries them the most. After reviewing everyone’s anxieties, most will probably be baseless (we usually worry too much about insignificant things) but some might be worth paying attention to. Discuss with the team what needs to happen and whether it requires individual or collective behavioral changes. A design at team Google first came up with this idea, and now they’ve turned Anxiety Parties into a regular event! The takeaway here? When in doubt, throw a party! (And in the process, give your teams the courage to be vulnerable).

It takes a lot of humility to listen to someone disagree with you. Removing the ego from a heated discussion is not easy, but it’s a crucial step in becoming a better leader and a leader deserving of respect and valuable input from others.

As passionate as Justice Ginsburg felt about her causes, she also felt that it was vital to lead the charge on change in ways that built followership. “Fight for the things that you care about, but do it in a way that will lead others to join you,” she famously said. She was confident in her belief that having the courage to listen is no less important than the courage to speak up: “I’m a very strong believer in listening and learning from others.”

I challenge you to: The next time someone disagrees with you (and it will happen!), try to hold back and let them finish their argument. It’s normal to feel the need to step in and push back straight away. But, in order to foster a healthy and productive culture of dissent, it’s important to listen above all else and empower others to speak up. As Simon Sinek wrote, “leaders eat last.”

Elevate your leadership with these key ingredients (purpose, diversity & inclusion, psychological safety, and humility) in THRIVE: Lead With the World in Mind. 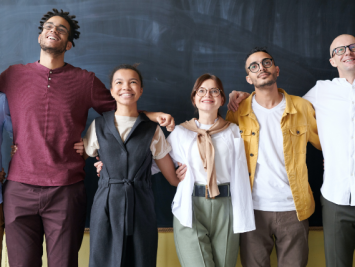 Learning to love healthy conflict: How culture influences our approach to conflict 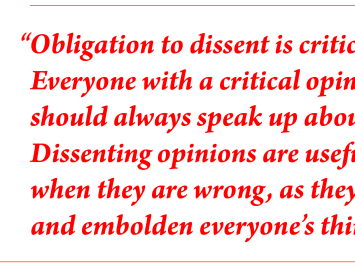 Why you should foster a culture that welcomes dissent

Why creating a culture of dissent or even an obligation to dissent, is important in the workplace. THNK school of creative leadership. 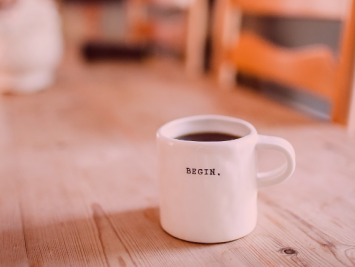 How to welcome transformation during crisis