How to have difficult conversations at work 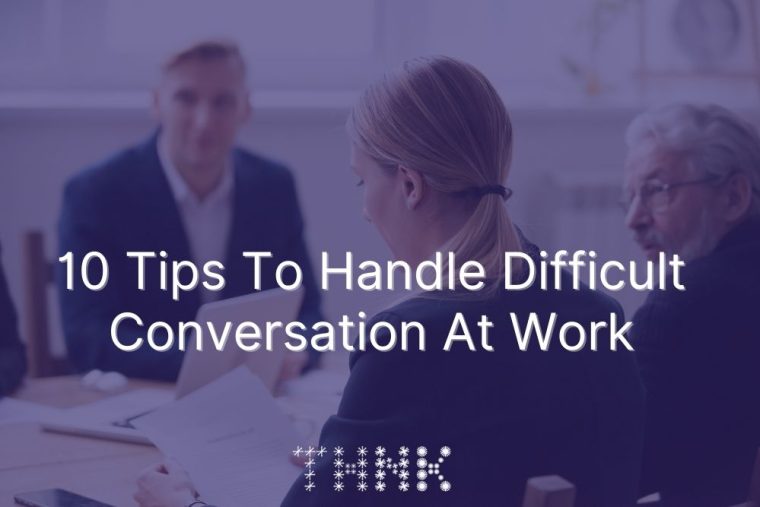 For any employee at any organization, difficult conversations are unavoidable. Whether it’s addressing poor performance, terminating an employee’s contract, or asking for a promotion, leaders will also have to face tough conversations.

We spoke to three THNK Faculty members – Bernice Feller-Thijm, Rosalie Puiman, and Ien van Duijnhoven – to get a few tips on how to have difficult conversations at work.

What Are Difficult Conversations?

Bernice says, “A difficult conversation is always something that has a personal impact. For example, when you have to tell someone they did or said something that you don’t like or they’ve rubbed you the wrong way. Those types of conversations are always very difficult.”

Types of difficult conversations at work include:

Based on input from experienced THNK Faculty members, here are 10 tips to handle tough conversations like the ones listed above.

As with most professional conversations, it’s important to be prepared. Some things you can do to prepare for an upcoming difficult conversation include:

At the beginning of your tough conversation, it’s important to explain the context to the other person. Bernice advises, “Express things that are objective: something that another person could have observed. Don’t make it too vague.”

Rosalie adds, “If you can listen to the other person with real curiosity and real honesty and speak with sincerity – truly speaking your truth, not covering up, not faking things – then the other person has no other option than to come with you in that sincerity.”

Trying to “win” a conversation will not bring you success. In fact, it will also diminish trust between you and the other person.

To avoid trying to win a conversation, adopt the “And Stance” – taking control of the conversation by using “and.” Rosalie explains, “Knowing that you can be right AND the other person can be right at the same time will lead you to not necessarily win the argument, but you will find that you can come to a way forward that works for everyone.”

For Bernice, “it all comes down to trying to understand the perspective of the other. What we forget, especially when we’re hurt, is that we want to be right. In a difficult conversation, it’s not about being right. It’s about understanding each other’s perspectives.”

This doesn’t mean you have to reach a point of agreement. Even if you get to a point where you understand each other but don’t agree, that’s also a successful result.

On a related note, don’t make it about you. Ien says, “The hardest part is to allow yourself to hear new things and not only the things that confirm your beliefs.”

In any type of difficult conversation, it always helps to return to what you share with the other person. What are your shared values and goals? Why are you in this together?

Ien tells us, “When people have been working with each other for a long time, they have more assumptions – but that’s part of the pattern.” Becoming aware of your assumptions and behavioral patterns is the first step to finding common ground with the other person.

Rosalie emphasizes “the power of mindfulness in difficult conversations.” Fun fact: Rosalie even wrote a book called “The Mindful Guide to Conflict Resolution.”

She says, “Very simply, you need to be present. Thinking about what you’re going to say next is very counterproductive.”

A classic mindfulness approach is adopting the “Beginner’s Mind.” In a difficult conversation, this means stepping back, looking at the facts, postponing judgment, and examining what is going on in the present. Understandably, this is easier said than done, but it can be very helpful to do during a tough conversation.

Perhaps the most ineffective thing you can do is enter a difficult conversation with a solution in mind. “We are all solutions-driven. We want to solve the problem,” Ien admits. But it’s important to “keep an open mind and an open heart,” Ien puts beautifully.

“If you go into a difficult conversation wanting to get to point B specifically, you make it a lot harder for yourself,” Rosalie adds. “It’s the winning paradox: you’re so focused on reaching that one point, you lose track of what’s actually going on.”

When you go into a conversation with an open, curious mindset, oftentimes you’ll find that new solutions arise that you didn’t even think of.

If the conversation isn’t going well, it might be better to revisit the topic at a later time. “Sometimes it’s best to just put it aside and revisit it in a few days,” Rosalie says. “Cutting it in stages can be very helpful.”

Even if the issue you’d like to discuss is urgent, it’s not an emergency. “It’s very important not to go straight into defense or offense,” Bernice urges. When you are calm and level-headed, you’re less likely to be offensive or defensive.

If your difficult conversation has gone well (hurray!), “make it concrete how you move forward,” Bernice suggests. “If you want to work together moving forward, make that tangible.”

Bernice also emphasizes the importance of letting go. “People are very resentful and they don’t let it go,” she says. “If you had a really good conversation, let it go.” If it happens again – whatever the issue may be – make concrete steps on how you will both resolve it next time.

Difficult conversations can bring up a lot of emotions in everyone – whether they bring up past issues or make you feel vulnerable and out of your depth. By using essential leadership skills like deep listening, empathy, and an open mindset, you will surely become more comfortable in having those tough conversations.

We have leadership programs for three career levels.