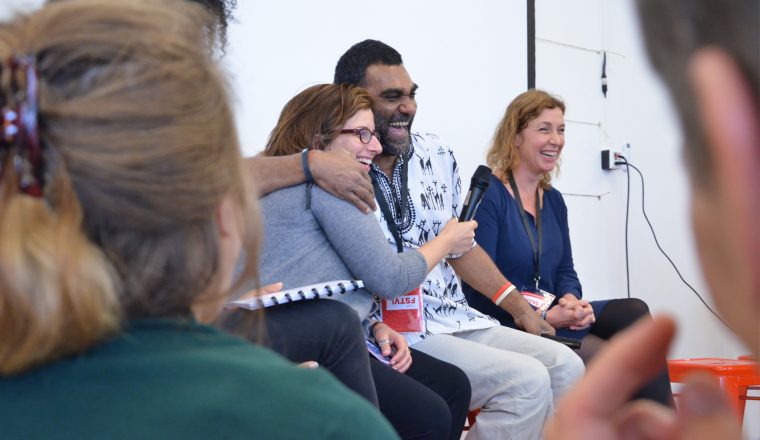 This year’s THNK FSTVL focused on the theme of Resilience and kicked-off with an incredible forum session titled “A Billion Acts of Courage” with Kumi Naidoo, a South African human rights activist who battled the Apartheid and the former international executive director of Greenpeace International.

“The current generation of leaders is leading like they don’t have kids” said Kumi while reflecting on his time as international executive director of Greenpeace International. He explained how before going into negotiations with various CEOs, he would always research the number of children and grandchildren each executive had.

Kumi Naidoo’s talk sparked rich reflections on why we need to lead courageously toward a better world, the importance of strong connections with one another, and the current state of democracy. Catalyzed by members of the THNK Community, the session dove into perspectives on society at large, empathy and empowerment. Many themes stood out from the session:

@THNK_org collective leadership by @kuminaidoo - #leadership understand U have to build it with others pic.twitter.com/mJ21fYMWsa

However marginalized, people understand their own reality much better than you ever will. Urban creatures don’t understand what it’s like to live in another’s shoes. The best thing you can do is talk and listen. How can we apply this principle in everyday life? How can we be better listeners in the work we do?

A human being is only a human being because of the relationships we have; the wisdom and power of Ubuntu, “I am because you are”. How can we better connect with our collaborators, friends and family to re-energize? How can we make human connection core to inspiration?

The era we are moving into requires immense courage from today’s young people. The definition of insanity is doing things over and over again and expecting different results. We need young people to try new things and do things differently. How can we be changemakers? How can we influence the dramatic shifts in priorities that the world needs today?

#fstvl @THNK_org with @kuminaidoo: "Young people need to be the leaders of TODAY...because there might not be a tomorrow". pic.twitter.com/5h394cEC5s

Kumi reflected on the complex process of asking for a lower salary, as he was unable to accept a salary that was getting close to what “the 1% has”. Leaders have to inspire by the example they set. What example are you setting in the life you’re leading? What do you want to change?

Activism as a marathon

To what do you want to devote the rest of your life? What change matters most to you?

All attendees of this year's FSTVL were previous participants of our Creative Leadership Program. This program is a 6-month part-time learning journey for leaders looking to to realize their fullest, personal potential and scale their world-changing enterprise idea.