How to Influence Without Authority? 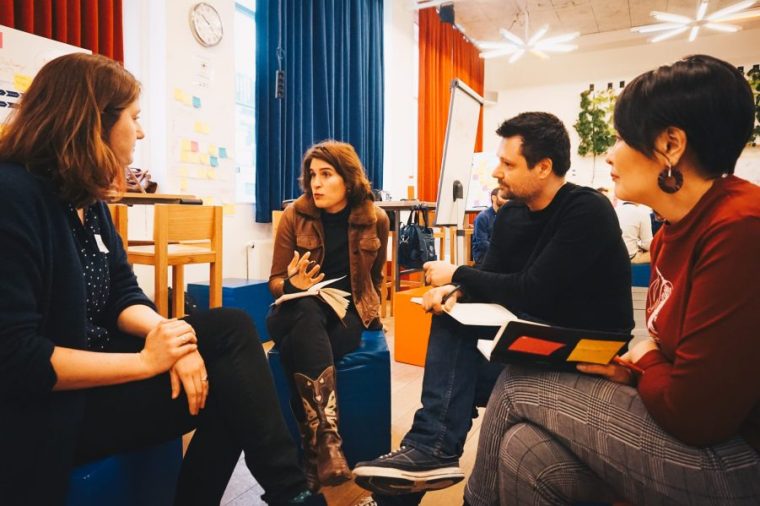 Influencing without authority is an important skill for any leader. Whether you are a team lead, the manager of a cross-functional team, founding a startup, or overseeing projects and resources, the ability to influence without authority can help you get buy-in from key stakeholders, improve collaboration within your organization, and boost your career.

In this article, we gathered tips for leading without authority from three THNK Faculty members – Olga Romanillos, Isabel Laas, and Simone van Neerven – based on their experience exerting influence without authority.

What is Influencing Without Authority?

Influencing without authority is the ability to influence others without having any power over them.

You don’t have to be the CEO, investor, or even the most senior person in the room to have influence. Relational skills such as deep listening, effective assertion, and self-awareness are all tools you can use to influence people around you in an authentic way.

In the THNK Emerging leaders program program, you will explore how you can influence your organization using the skills you develop during the six-week journey.

Benefits of Leading Without Authority

Some of the world’s biggest achievements have only been possible through leading without authority, such as the creation of Google Maps. Modern-day influencers like Greta Thunberg, who has mobilized millions to challenge world leaders to prioritize climate action, show that influence is more powerful than authority.

How to Influence Without Authority?

When THNK Leadership Coach Olga Romanillos worked as a Marketing Manager at Philips Lighting, she was tasked with spearheading a new initiative: selling Philips Lighting products to architects and designers. In order to target this new segment, Olga had to influence other country teams and departments, such as sales and production.

“There were many moments where I thought, ‘Why am I doing this?’ I will never change the culture,” Olga recalls. “It was a cultural approach – most of the employees were engineers and I had to convince them to focus more on aesthetics.”

If you don’t have that personal credibility, “it’s going to be difficult, but not impossible,” says Isabel Laas, THNK Leadership & Business Coach. “Ask yourself: Where is it that you can add value?”

No matter how big or small your goal is, you can’t influence your organization without a solid network of allies.

“From the struggle I went through, I was very lonely,” Olga says. “It was very good to have allies: those who believe in you, who want to support your mission, who you can count on.”

For Olga, her allies not only offered emotional support when she was struggling but also practical help if she got stuck.

THNKer and THNK Faculty member Simone van Neerven also found allies to push her initiative forward. As the Manager of Distribution, Catering & Board Supplies at KLM, Simone was assigned an ambitious mission by the division’s Vice President to reduce turnaround times of KLM aircraft (the time between when an airplane lands and when it takes off).

This objective had been in deadlock for years because there were so many moving parts and competing interests. Simone had the difficult task of bringing everyone together, and she couldn’t have done it without the backing of her “sponsor,” the Vice President. “One thing I did was find my allies higher up in the chain, who really helped me to push others to support the initiative,” Simone explains. “The reason why the COO got on board is that I called my sponsor. It’s up to you to figure out who is higher up in the chain and can help you mobilize others.”

“The first thing I did in my preparation was I asked two key stakeholders: ‘What are your no-go areas?’” Simone reveals. “That’s an important tip: Know where you need to influence.”

Simone also emphasizes the importance of focusing on commonalities. “People tend to think in differences or polarities,” she explains. “If people focus on commonalities, it’s more bonding.”

As a former Business Unit Director at a large pharmaceutical company, Isabel constantly had to align teams and strategies across geographies, leading without authority among so many moving parts. “It was literally through finding the common ground that you could influence,” she says.

“What I learned is it relates to the level of relationship you can build,” Isabel adds. “If people can relate to you, they are sometimes more willing to negotiate on your behalf. What do you have in common? What don’t you have in common? What’s negotiable? What’s not negotiable? You have to understand their environment, otherwise, you can very quickly get into a stalemate situation.”

Listening is fundamental for all effective communication.

In order to influence without authority, “you need to be able to listen and empathize as much as you can,” Olga urges.

“The absolute essence of influencing without authority is seeking to understand and listening to the other person’s needs,” Isabel states. “You’ve got to be the one who is perceived as seeking to understand more. What’s the higher level of thinking or higher frame of strategy here? It’s a constant re-evaluation of what is negotiable and what’s not negotiable. What do they see what I don’t see?”

5. Tap Into Passion Through Storytelling –

Storytelling is an important part of persuasion.

“You’ve got to be able to put your case forward using your storytelling skills, where you can take people along,” Isabel advises. “How do you convey? How do you persuade? How do you tell the story?”

Olga attributes the success of her initiative to passion. “I was passionate about the topic and that passion was in everyone,” Olga says. “There was already a longing [to make beautiful products] in the minds of the engineers. They were also looking forward to being more involved in iconic projects. They were proud to be part of it.”

An essential creative leadership skill, storytelling can increase your capacity for greater impact and move people to act.

To successfully influence without authority, “EQ must be high and ego must be low,” Isabel says.

The ability to have a flexible mindset is important to your – and others’ – success. Simone decided to give her sponsor, the Vice President, the credit. “What I did was give my sponsor the honor, it was his success,” she says. “I couldn’t care less whether people saw that I was the driver behind the change, but I made sure my sponsor was the owner of success. I had to let go of my own ego.”

Want to master influencing without authority?

We have leadership programs for three career levels.