Johan Hoorn on being born to THNK 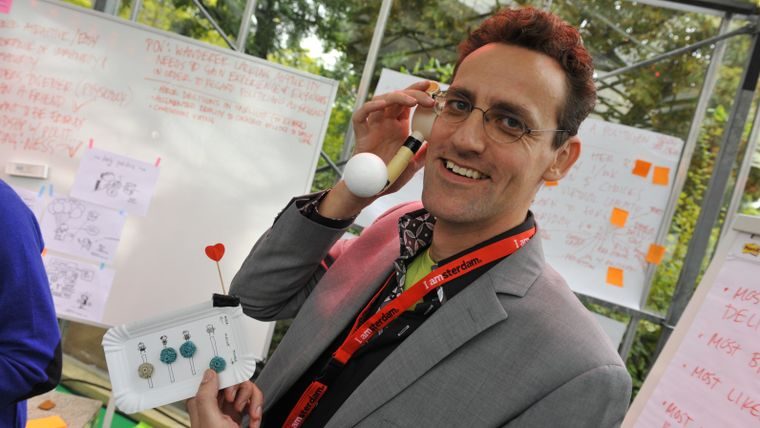 This article was written by THNK's Director of Education and Research Johan Hoorn.

As THNK’s Director of Education and Research, I am very happy to have helped lay the foundations of this school, hoping it will provide to others what I could only achieve the hard way: being your complete self while trying to help others by offering all of the creativity that is within you.

My first big dilemma in life was related to whether I would go to art school or to university. My style of painting and drawing at that time was figurative and not at all en vogue in the mid-eighties. Additionally, the way in which artists were speaking about art was quite confusing to me. This lack of being able to follow their thinking made me decide to go to university, assuming this would mature my mind. I went off to study Modern Literature, while taking extra courses in the philosophy of science, logics and formal semantics hoping to teach my associative and quirky brain some thinking discipline.

From here on out, a series of seeming detours characterized my academic life. I got into psychology and learned how to do brain measurement. A PhD track followed, focusing on psycho-physiological responses to reading literary metaphors. When I—inevitably—became frustrated about the fact that psychological theory still assumes many implicit parameters, mechanisms and variables, I became interested in computing to try to counter this. This allowed me to come into contact with people from computer science, working in the field of software engineering and interaction design.

Wanting to complete the picture of creative content, empirical verification, and logical consistency, I eventually wrote a second Ph.D. thesis on the design and redesign of large information systems. A lot of the related research was done within the corporate world, which allowed me to become acquainted with quite a number of businesses. The engineering part of this new work brought me back to my old love for the arts because these people called themselves designers and had great taste for look and feel, aesthetics, creativity, 3D multimedia, and virtual reality.

I started teaching design classes and mixing art with computer science while making use of psychological theory on the impact of design on the user. Additionally, my love for multimedia got me involved with multimedia theater plays, writing scenarios and thinking out visuals. After all, I had slowly started becoming the artist that I had always wanted to be.

By that time, I faced an identity crisis, no longer knowing what I was professionally: an artist, literary scholar, psychologist, computer scientist, communication specialist, or none of the above? The only thing I knew for sure was that I was multidisciplinary, which was not generally appreciated in the academic world in which many a crank would point out time and again what I was not. Psychologists would dismiss me as being a computer scientist, literary scholars told me I was a psychologist, artists perceived me to be too scientific, and scientists told me I was too much of an artist (which in their world equals as much as being a clown).

But change was on its way and I was lucky. With a new university board, interdisciplinary research was heralded as the area where future breakthroughs were to be expected. Interfaculty and interschool research institutes were being founded. I jumped on the bandwagon and became the Director of the Center for Advanced Media Research Amsterdam (CAMeRA) with a strong focus on creativity as its core characteristic.

Through this position, I became involved in THNK: my revelation and redemption, the school that I should have gone to myself when I was much younger and undecided on whether I would be an artist, a scientist, or a world savior. No more dilemmas! At THNK you can do it all, be it all. No choices, no boundaries! Harnessing diversity within you is not a handicap, it is a landscape of opportunities!

To begin your own creative leadership journey, join the THNK Creative Leadership Program. Visit the program page to find out if you qualify or contact us at admissions@thnk.org.