Make new rules – even silly ones – to change the world 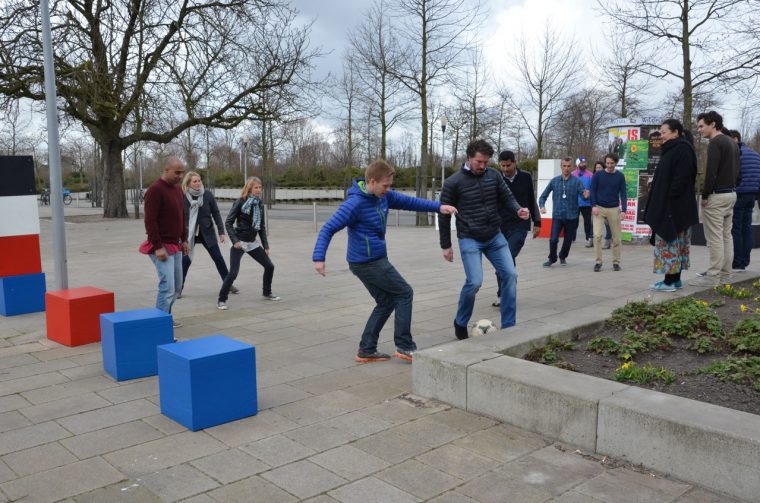 As two teams are about to play football, the facilitator introduces a novel rule: the scoring cannot start until one of the ladies in the teams has scored. He then invites the teams to come up with some new rules of their own. The discussion starts nervously, with remarks that are aimed at getting laughs, often a sign that people are not completely comfortable. The rule both teams settle on is that you can only score if you have your eyes closed. Then the match starts, with some hilarious scenes, much laughter and a rather odd role for the striker: ‘just stand there with your eyes closed and we will shoot the ball against you.’ The ‘third half’ consists in debriefing the game and the effect of the rules; already the reflection is deeper and there is less need for nervous laughter.

Then two other teams start with discussing what new rule to introduce. They end up agreeing to cheer for all goals, also those of their opponents. It takes a few goals before everyone consistently does this and it is great to see how people throw their arms up in agony at having conceded a goal and then turn it into a cheer of happiness. The rule changes the atmosphere on the field.

This is football3, or ‘football for change’. It started in 1995 when a German student in Colombia wanted to effect a change in the then violent city of Medellín, where every year over two thousand young men were murdered. In those days the rules the young men would agree on could be leaving the guns off the field or agreeing to not shoot each other over anything that happened on the pitch. It took two years of preparation to get the format right but then it worked, and it worked miracles. In the year after introducing ‘football for change’ the number of murders among young men in Medellín dropped from two thousand to three. This football format is now used around the world for change and will also be part of the Fifa world cup event in Brazil.

We were playing football3 during the biannual THNK Acceleration festival, because that German student, Jürgen Griesbeck, is now CEO of streetfootballworld and also participant in class 4 of THNK. My taking part led to some unexpected learning. I am reminded of a quote in the movie Jobs that I will paraphrase: ‘ We all come into the world where there are rules already, there are ways of doing things. Most of us simply accept them. A few of us set out to change them and in doing so change the world.’ This practicing of changing rules together leads to at least two things:

Even though the rules change things on the pitch, it is the way of making new rules that changes people and especially groups of people. In Colombia the police even agreed to not come and arrest known murderers during the football games because the process had such enormous benefits to the community. It brought hope in a place where most people shrugged and said the murders are terrible, but that is simply the way it is here. For me participating in the three halves of football3, the pre-match discussion, the game and the post-match reflection, has shown that we don't have to accept things as they are, even if they have been like that for a long time. We can go about changing them, together.