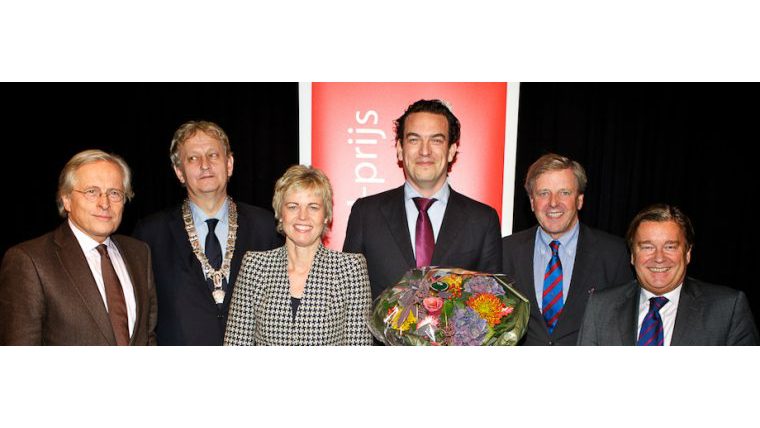 The IJ-prijs is a prestigious prize that is awarded annually by the City of Amsterdam and PricewaterhouseCoopers to a leading entrepreneur in Amsterdam, with specific attention to their contribution to Amsterdam's international profile as well as its economic development. The jury awarded the 2010 prize to THNK Chairman Bas Verhart in recognition of Bas' commitment to positioning Amsterdam as a global creative capital. Over the years, the IJ-prijs has become an important symbol which recognizes the entrepreneurial spirit of Amsterdam. We congratulate Bas on this significant achievement.

"Negativity leads nowhere." This is an expression that Bas uses frequently and it suits his attitude perfectly, being a firm advocate of positive action. According to guest speaker Dr. Michael B. Johnson of Pixar Animation Studios, "Bas always has an enormous presence and energy". Amsterdam Mayor Eberhard Van der Laan presented Bas with the award.

According to Mayor Van der Laan, Bas has helped create a more integrated creative industry in the Amsterdam metropolitan area and he has been able to make many people aware of the importance of a powerful creative industry for the city and the Netherlands. "Bas has pinpointed the creative industry as an important growth sector for the city as well as the country and he has been an important point of reference for administrators on both city and national levels. His great strength lies in his drive, vision and ability to win people from around the world over with his ideas."

To join the upcoming THNK Creative Leadership Program, visit the program page to find out if you qualify or contact us at admissions@thnk.org.