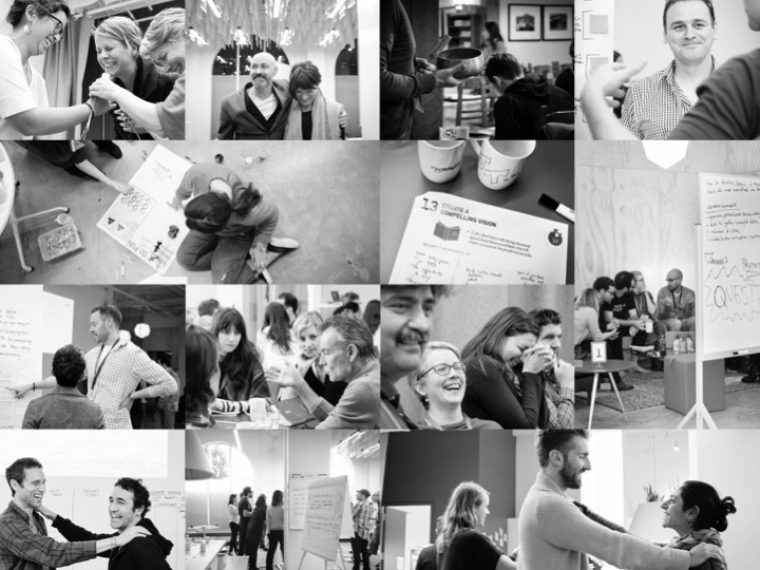 When THNK alumni and partner Sharon Chang, an accomplished impact investor, creative force and rabblerouser, was asked why THNK Vancouver’s decade-long challenge exploration of Capitalism was the perfect fit for this School of Creative Leadership and its diverse network, she mused: "Ayn Rand said that 'the moral justification of Capitalism lies in the fact that it is the only system consonant with man’s rational nature, that it protects man’s survival qua man, and that its ruling principle is: justice.' We can debate that, of course. But more importantly, perhaps we've come to a point in history where man's emotional nature needs to weigh in more. What then is the most consonant system with our individual and collective emotional nature?"

A Radical Approach to Reworking Capitalism

With that provocation, more than two dozen THNKers—accomplished cross-sector entrepreneurs, changemakers, and corporate intrapreneurs from across the globe—came together to innovate collectively around ways to use alternative currencies to increase access to affordable, low-carbon housing and better ways to radically scale impact through more strategic philanthropic investments. Using a broad range of design thinking and venture design approaches, the first THNK Vancouver cohort iterated on insights, concepts, and opportunities for impacting our society and institutions. Though they didn’t do it alone. Participants and faculty were joined by our exceptional Challenge Innovation Partners: the City of Vancouver, the Digital Finance Institute, PBS, TTSL, A Better Life Foundation, and the United Way. We were also delighted to have access to additional thought leadership from affiliated scholars from the Stanford Center on Philanthropy and Civil Society.

With support from this broad ecosystem, pioneering THNKers delivered wildly varying insights and opportunities for public/private partnerships, digital platforms, and on the ground efforts: an app that allows people in need to locate and access housing, food or medical services using controlled digital currencies; a property management approach that specializes in efficiency upgrades, allowing owners and renters to enjoy reduced costs and an opportunity for earned equity of low-carbon housing; and a specialized agency that matches well-resourced “Corporate Leapers” with vetted high-impact social ventures to amplify engagement and outcomes.

These are just a few of the concepts to be discovered and explored in first THNK Future of Capitalism Challenge Report—a rich snapshot resulting from dynamic collaboration and the application of rigorous process. The report calls creative leaders around the world to share knowledge and make new connections, to rally support for diverse thought, and to take the baton if their organization is better positioned to collaborate or take concepts forward.

As a post-industrial society, Ms. Chang went on, “It’s not just the future of how systems might work mechanically. What gets me energized is a future social system that ingests the chaos we see today and codifies its inherent value into a set of more harmonious social/cultural norms. It’s not enough to ask whether there is a different flavor of Capitalism. We ought to think bigger and imagine the Future of Capitalism to be an entirely new paradigm. This might not be an exercise of radical invention, but rather a process of synthesis. I have no idea what it is really, but I do think we need to go beyond adding a modifier in front of Capitalism.”

Open sharing is a critical piece of the spirit in which we approach innovation and impact at THNK, as is the recognition that each report out is celebrating a milestone in a much longer journey. Our 10-year investigation of the Future of Capitalism picks up again at the end of January with our next cohort, returning to solution spaces that demand more examination and employing new lenses offering different perspectives. Digital currencies. Climate finance and resilience. So-called sharing economies. And real prosperity and upward mobility for all.

So, it is with great pride that we share the first hints resulting from the Future of Capitalism Grand Challenge in Vancouver. We know that these are enormous issues. And in order to see real change, we must engage the entire spectrum of stakeholders in our society to not only spread good ideas but also take action. We must become positive “nodes of contagion” as our Forum Guest, Eric Liu, so beautifully suggested.

Diving into the findings in this report is a first step. Enjoy!

Learn what it takes to disrupt the status quo and accelerate the right kind of impact by learning more about THNK’s Executive Leadership Program.