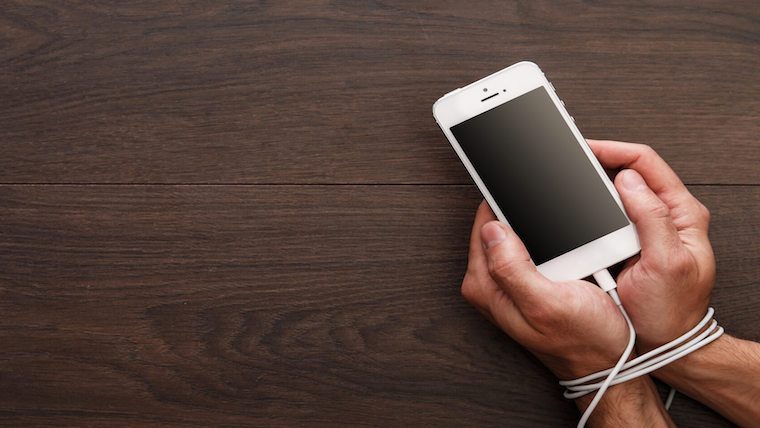 In our ‘Trailblazers’ series, we bring you perspectives on creative leadership, social innovation, and positive change from THNK’s worldwide participant community. Today, Heidi Boisvert—designer, creative technologist, founder of futurePerfect lab and co-founder of XTH—digs into our de-humanizing addiction to technology, and offers a redesign that might just bring us back together again.

First, tell us about what you do. You’re making digital music with the human body, and have described XTH as ‘expressive technology.’ Is this a new market sector, or a new philosophy?

It’s both. There’s a lot of hype these days around wearable tech, which is really just informatics that tracks, measures, and analyzes data. But the body is more than data. It’s physical, and it has inner vibration. Our first product is a wearable musical instrument that captures and amplifies inaudible sounds from the user’s heart, blood and muscles to enable anyone to create and play interactive music as well as video or games from their body. In 2012, it was named the “world’s most innovative new musical instrument” and for the past two years was awarded Harvestwork’s Creativity + Technology = Enterprise Award through funds from the Rockefeller Foundation. Today, the Xth Sense™ is used by a range of creative people, from performing artists and musicians to researchers in physiotherapy and prosthetics, and in universities and other diverse fields.

Together, we’re producing a limited run of the new standalone wireless version with added functionality and an API that interfaces with mobile, web & gaming platforms. This takes what we initially created for artists and the hacker culture and makes it market-ready, ripe for distribution across media and tech outlets, musicians, gamers and biomedical researchers for feedback and reviews. After that, we’ll start raising capital and expand our user base through Kickstarter, aiming for production in 2015.

Let’s back up. Two years ago, you came to THNK with a clear mission in mind—to scale the company you were working on at the time. But it seems that you ended up heading in an unexpected direction. Why is that?

Part of the mystique surrounding THNK is that nobody ever knows what to expect. As a game designer, I imagined THNK to be a collective Hero’s Journey: beginning in an ordinary world, but peppered with cryptic messages. Then, a drop down a rabbit hole into an alternate reality, full of wonders, supernatural forces and challenging interactions. After adventures like that, the heroes always return with new superpowers and knowledge.

By the end of the program, I did feel like I’d been through an underworld. I’d been confronted with beliefs and core values that I hadn’t realized were limiting me, and as many people do at THNK, I had a bit of a crisis of passion. Call it ‘positive disintegration.’ The social conventions and expectations that I’d been clinging onto no longer made any sense. This removed the barriers that had held me back for so long.

When you could see those barriers clearly, did it lead you to make some decisions right then and there?

It did. I’ve spent the past 10 years anticipating future trends, and developing content for 3D games, Facebook transmedia experiences, and augmented reality mobile apps to drive positive social change. But I’d reached the point where I wanted to have greater impact at the intersection of pop culture, emerging technology and large-scale systemic change.

In the process of keeping up with the latest and hippest technology, I’d forgotten to step back and consider how the broader legacy of cybernetics—which emphasizes quantification, predication, and control—shapes humanity. I began to wonder: how might large-scale change happen in our current media ecology of constant interruption? Can we change our collective behavior and attitude and shape public imagination despite our increasingly noisy society? Is social engineering for good just another form of propaganda and mind control?

Were you worried about adding to the noise, as a designer and creative technologist?

In my time at THNK, I made a point of asking provocative questions about the design of contemporary intelligent technology—the Internet, mobile devices, immersive displays and wearables—as an “encoding of a kind of moral and political structure with an attendant social contract,” as new media artist David Rokeby first described. I realized that it is my responsibility to not only reflect upon emerging technology and its effect on cultural values and behavior, but to contribute to a counter-discourse and a design practice that challenges and transforms emerging technology.

That’s quite a balance to strike—to love technology and want to propel it forward, while at the same time being aware of the value in scaling back. Most of us feel this way as individuals, but your work requires you to address both sides systematically. Where do you begin?

Technology gives us so much — even non-profits that I’ve worked with invest large portions of their limited budgets to fund new media strategies that translate their constituents, essentially, into data sets. Some organizations have bought into “neuro-campaigning”—the latest mass persuasion technique, which “replaces gut instinct with data-driven order” for social control. Even with the best of intentions, change agents, too, are unwittingly reinforcing systems of oppression caused by our dependence upon technology.

After Module 4, I went completely off the grid to the coast of Maine à la Thoreau. I had to detox from all social media and most technology in order to reflect, through direct experience, upon the socio-cultural and neurobiological impacts of intelligent technology. I had to unplug, to prioritize offline interaction. That’s when I realized that, in order for large-scale “mind and heart” shift to happen, we have to first restore critical feeling.

Unknowingly, we have become APIs run by protocols and algorithms. Invisible technologies clog our working memory, decreasing our ability to empathize. Clinical studies have shown that the areas in our brains responsible for both emotion activation and knowledge production—the amygdala and hippocampus—are being eroded by current technology. Interestingly, the same areas of the brain are restored through mindfulness and kinesthetic engagement. This is why expressive technology, like the Xth Sense, is so important; it offers the potential to re-stimulate “numbed” areas of the mind and body through sonic vibration.

It’s fair to say that technology has also opened up the world by spreading information from and to places unknown. Does this not allow for more criticism on today’s social problems?

For over two centuries, we’ve viewed technology from two opposing camps: as an unavoidable force driving progress, or as a phenomenon that harms human agency. For me, it’s more useful to see both sides. Technology is an ambivalent artifact, yes, but intelligent technology numbs our biological selves through what Marshall McLuhan called ‘auto-amputation’. Humans are becoming rewired to prefer technology over interpersonal engagement. Like any form of addiction, what we typically numb is shame— the fear of being unworthy of love and belonging.

Technology encourages the “performance of connections,” making us feel like we can control our relationships and manage our presentational selves in a way that defends against vulnerability, emotion, and the messiness of subjectivity. That illusion of control may feel safe, but it has also made us less human.

Just recently, UCLA scientists showed the rise of social-emotional incompetence in young people due to less experience engaging face-to-face. When students were sent to a nature and science camp—without any electronic devices—their ability to read facial expressions and non-verbal cues increased significantly in only five days. When we are present for one another, the world opens up in more profound and unexpected ways than any level of data access affords.

Isn’t it counter-intuitive to tackle our technology addiction with technology, even if it’s a more humanized form of tech? Couldn’t we all retreat to simpler lives and natural surroundings, like you and Thoreau?

The economist Daniel Smihula believes we have just entered the sixth wave of innovation, which he calls the ‘post-biological phase’ and predicts will peak around 2035. As a society, we will only become more dependent on biotechnology, robotics, bio-mimicry, nanotechnology and trans-human enhancement. Right now, we’re at a point where we simply have to press pause and reconsider not only what kind of technology we want to use, but also what kind of people we want to be.

Biomedia, like Xth Sense™, offers an alternative. We think it’s possible to make technology more human, and more sustainable. Rather than just flooding us with data, it should treasure and extend what makes us human and what makes us social—creative expression. It should animate rather than inhibit critical feeling.

Technology is not going away. But together, we can consciously design it to move away from fear-oriented prediction, quantification and control. Instead of brandishing technology to reject the body, regulate emotions and canalize the senses, expressive technology can serve as a vehicle for becoming more fully human.

Heidi Boisvert is a new media artist, experience designer and creative technologist who is passionate about technology. A THNK participant, Heidi serves as CEO and Creative Director of futurePerfect Lab, a boutique creative agency that works with non- profits to develop imaginative and playful applications of integrated media and emerging technology. Most recently, Heidi co-founded XTH, an open-source biotechnology start-up blurring the boundaries between human and technological bodies for new modes of expression.

Whether it’s scaling your business or re-awakening your passion, the THNK Executive Leadership Program can help you tackle a range of leadership challenges. Visit the program page to learn more.