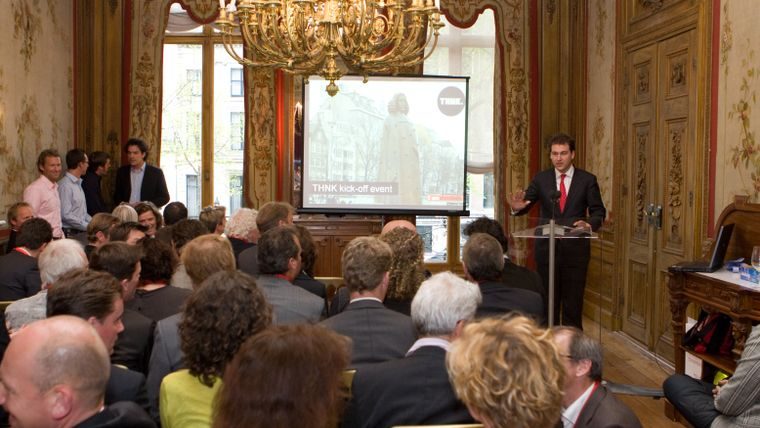 On 27 April 2010, THNK’s official kick-off took place at a very special location: at Herengracht 502, the Amsterdam Mayor's Residence. The building dating back to 1672 has been used as the private home of the Amsterdam Mayor since 1927. With many formal national and international receptions, presentations, and the signing of charter agreements, the building currently acts as a symbol of the openness of the city's public office. We were very honored to be able to host our kick-off meeting and reception in this very special place on the famous Amsterdam canals.

The THNK kick-off brought together a rare group of 100 unique individuals with academic, public, design, technology, social, finance and entrepreneurial backgrounds. Deputy-Mayor Lodewijk Asscher kicked-off the event by welcoming all guests and referring explicitly to the special space that they were being part of. Next, Renee Bergkamp, the Director-General for Innovation at the Netherlands Ministry of Economic Affairs, took the floor and talked about the importance of creativity and innovation for welfare and prosperity in our global society.

Concluding the formal part of the program, a final talk was given by Bas Verhart, one of the masterminds behind the THNK business plan. Bas took the chance to familiarize the audience with the world of THNK: its purpose, objectives, philosophy and approach to education, research, and business acceleration.

Finally, Bas gave the stage to three visiting representatives of Stanford's famous d.school, who engaged the audience in a real-life example of what design thinking could entail as one of the core elements of the THNK curriculum. All audience members acted in pairs and went through a pressure-cooking process to jointly design the perfect wallet. By making use of the enthusiastic and upbeat atmosphere, many extraordinary designs were developed—some to the objection of the entire audience, others to the amazement of their creativity.

For us at THNK, the outcome of the exercise was just perfect: we were left with an energetic audience that felt drawn to how we do things differently at THNK. Drinks, snacks, and networking concluded this very special evening, which was a true milestone in the establishment of our institute.

Take a look at photos of the THNK kick-off event.

Join the upcoming THNK Creative Leadership Program. Visit the program page to find out if you qualify or contact us at admissions@thnk.org.