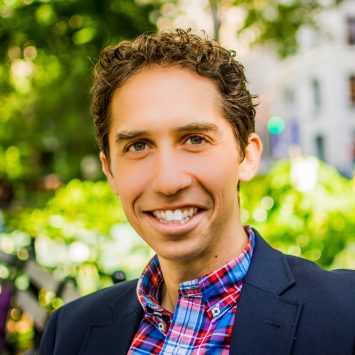 Executive Director
at Mobilisation Lab
My experience and deep interests:
I am based in: Washington, D.C.

Only days after graduating college, I found myself in a job that had never previously existed on a political campaign: mobilizing hundreds of thousands of local volunteers via the internet to (ultimately) take a presidential candidate from unknown to frontrunner.

While Governor Howard Dean’s 2004 bid was unsuccessful, I saw firsthand what everyday people can achieve when they’re inspired and connected. In the 15 years since, I’ve dedicated my career to guiding nonprofit advocacy organizations to have greater impact through the creative use of participatory strategies and technologies.

With several colleagues from the Dean campaign I launched an award-winning digital strategy firm, Echo&Co. Then in 2011, I leapt at the opportunity to help Greenpeace International enable the full potential of millions of supporters. Over the course of five years, our “Mobilisation Lab” team guided one of the world’s largest advocacy organizations to rewire its campaigns for the modern era.

Today, MobLab serves hundreds of orgs, including Amnesty, UNICEF, Oxfam, and Save the Children. We coach, train and challenge our peers to leverage people power, deploy creative tactics, and tackle root causes so that they can win lasting progressive change.

I (occasionally) teach digital-era campaigning to graduate students at George Washington University and serve on the boards of several nonprofits, including Oxfam America and The Story of Stuff Project. When I’m not online, I love to cycle, ski, or trail run with friends (and hopefully a dog one day!) either from my home in Washington DC or wherever adventure calls.

I was nominated to become a THNKer by Femke Bartels