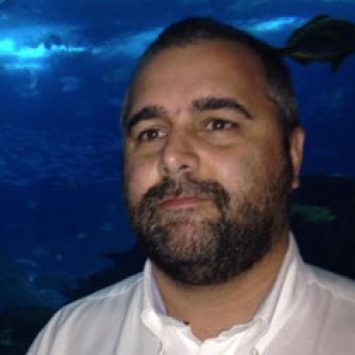 I work at the Oceanário de Lisboa since 1997, and currently directs the Commercial and Operations Department and Quality, Environment and Social Responsibility Department. Furthermore, since 2012, I am also manager of the Telecabine de Lisboa Lda. Between 2003 and 2012, I worked as a consultant, auditor and trainer in the areas of quality management, business process re-engineering, environmental management and safety management, in companies such as, Konica Minolta, CTTexpresso, Xerox Portugal and Iberobrita.

My passion for the oceans lead me to several projects in this area, namely, coordinator of the scientific project "Rebuilding Nature – artificial reefs in Cape Verde" (2008-2012), "Sea monsters" (2007), the "Fluviário de Mora" (2007). "Lost Forest" Centro Comercial Colombo (1998) and decoration of the marine environments of Oceanário de Lisboa (1996). I was also the senior researcher of the Laboratory Bimini Biological Field Station/Miami University (1996).  I am the author and co-author of a dozen scientific papers, with more than 30 presentations in congresses and scientific forums.

I am an active participant in several associative non-profit organizations related to conservation, education and sports. For example: Founder and Vice President of the Portuguese Association for the Study and Conservation of Elasmobranchs (1997-2001), the Presidency of the European Elasmobranch Association (1999-2001), Member of the Pedagogical Council of the Professor Noronha Feio School and Chairman of Review Committee of Auditors of the Parents Association of Noronha Feio School (2011/12; 2013/present), Member of General Board of the Parents Association of the High School Professor José Augusto Lucas (2012/13), President of the Association of Parents of High School Professor José Augusto Lucas (2013/present),  President of the Supervisory Board of the ESA Fencing Team (2012/present), Referee of the Portuguese Federation of Fencing, volunteer in the Association CASA- Centro de Apoio ao Sem-abrigo (2012/13).

I am an enthusiast of black and white fine art photography; I spend endless hours in my studio, facing the sea. Photography is a break in my daily routine. Scuba diving and mountain biking are some of my other hobbies.