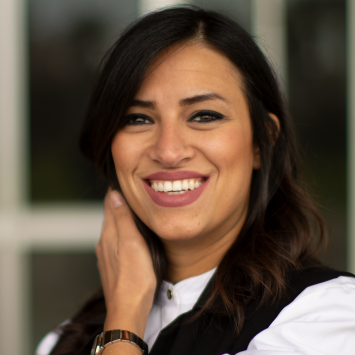 Lebanon Director
at Ruwwad Al Tanmeya Organization
My experience and deep interests:
I am based in: Tripoli
Other projects and organizations include: Divided Lebanese Neighbourhood Finds Peace Kitchen and Secondary Peacebuilding in Challenging Contexts: Ruwwad Center in Tripoli

Sarah Al Charif is the Founding Director of Ruwwad Al-Tanmeya NGO in Lebanon since 2012. She has been leading the community development and youth empowerment organization in Tebbaneh and Jabal Mohsen in Tripoli, in a center situated on the front lines between the 2 disenfranchised communities witnessing previous rounds of sectarian clashes. As a strong believer in women's advancement, Sarah founded Atayeb Tarablos community kitchen, as a social enterprise within Ruwwad meant to economically empower women living in financial distress who are victims of armed conflict. Sarah previously served in 2010 as a program manager for Maurice Fadel Prize, a Business Entrepreneurship Competition promoting the creation of startups within North Lebanon. She managed in 2008 educational, professional and training programs at Amideast and started her career path back in 2007 as an intern at Cisco in Silicon Valley.

Sarah holds a BS in Business from the Lebanese University. She is currently enrolled in the Executive Leadership Program at THNK Creative School of Leadership in Amsterdam. She attended the INSEAD Impact Social Entrepreneurship Program in France in 2017 as one of the 2 women leaders in the MENA region, awarded the Soraya Salti Social impact Scholarship. She was also previously enrolled in Harvard Kennedy School Executive Course “Organizing, Leadership & Action - Leading Change” and in George Washington University Course “Project Leadership, Management and Communications”.

Sarah is an alumni member of the World Economic Forum's Global Shapers Community for the Tripoli-LB Hub; she represented Lebanon in the WEF Annual Summit at Davos in 2018 being part of the DAVOS 50 Youth Delegation. Former Member of Junior Chamber International Tripoli-LOM and Lebanon's Young Leaders of Tomorrow Program (LYLOT); Member of the Lebanese League for Women in Business; Community Organizer; Social Activist; Interpersonal Skills Trainer and accredited Coach by Relational Dynamics 1st & Culture at work, UK.