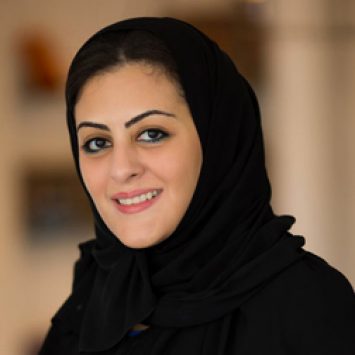 I am one of the first ten Saudi female lawyers granted the permission to practice law in the Kingdom of Saudi Arabia. I have served as a legal consultant in different parts of the Arab world including Saudi Arabia, Lebanon and Kuwait. I completed a Bachelors degree in Law (LL.B.) and a Masters degree in Islamic Law at the Faculty of Law at Cairo University. I also received my MBA degree from the American University of Technology.

In 2009 I was chosen to participate in the Harvard Executive program – ‘Leading for the Future: The Arab Region in a Changing World’ where I represented Tashkeil’s Socio-Economic cycle as an ecosystem for social change and development. In 2011, I was the first Saudi to serve as a fellow for the UNAOC on a tour of Europe and the U.S. I was also selected for the Women’s Media Center for the Progressive Women’s Voices Workshop in Media training.

I am the founder of many social enterprises that work on developing the creative industries in the region. I am President and Founder of Tashkeil – a Saudi-based social enterprise that incubates, accelerates and promotes creative entrepreneurs. In past 4 years, tashkeil has incubated 30 Middle Eastern designers, Organized 42 events, hosted over 16,000 visitors and launched 2 initiatives.

I am also the founder of Kayan space and studio – a membership based co-working spaces for Creatives professionals, entrepreneurs and freelancers.

Similarly, I serve as a member of the Evaluation committee at SIRB angel investor network. I am often invited to serve as a judge on numerous panels, evaluating startups and entrepreneurial ideas.

I am considered an icon in female empowerment and am an active member on the board of directors of Khadija bent Khowailid centre – a Businesswomen and Lobbying Center at the Chamber of Commerce and Industry Jeddah.

I have spoken on many public platforms such as Pecha Kucha in Beirut, Beirut Design Week, TedxWomen in Barcelona, and Boldtalk women. In my public speeches, I aim to communicate to the world that success and achievement are not a goal; they are a result; a perseverance.