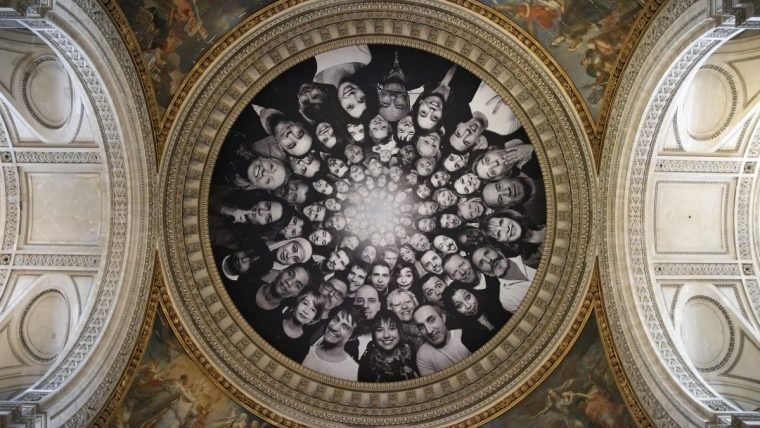 This article is part of the THNK EVERGREENS series. In the series, we bridge seminal works on innovation management and works by influential thinkers, by extracting key implications and offering new insights to innovation practitioners. This article builds on the book Post-Capitalist Society by Peter R. Drucker, linking his work on the future role of the social sector with recent work on the potential of global governance through collaborative commons.

In the 1990s Peter R. Drucker began to focus his attention on public sector management. Looking at the emerging knowledge society, he examined the incredible social transformations in the twentieth century, where we witnessed industrial nation-states turn into liberal democracies and welfare states. Society is now transitioning into a global knowledge society, posing new challenges. According to Drucker, “the old communities – family, village, parish, and so on – have all but disappeared in the knowledge society. Their place has largely been taken by the new unit of social integration: the organization.”

At the same time, Drucker was disappointed in the way that state and corporate enterprise failed or refused to deal with solving social tasks. The welfare state had failed to address social problems because it turned modern government into a huge bureaucracy. The large business enterprise once served as a workplace community of lifetime employment, while company housing and health care plans often proved to be incapable of tackling larger societal problems. By opting to focus on profits, these institutions outsourced social problems to non-profit organizations, all of whom are dependent on subsidies, grants and charity for survival.

Because of the inability or unwillingness of the “mega state” and large corporations to solve social problems, civil society has become alienated from these two institutions, and citizen power has greatly reduced. Privately, citizens only pay taxes and vote passively and periodically, while employee decision-making power and influence in big corporations is highly restricted as a result of rigid hierarchy. Drucker also worried about the multiple waves of public budget cuts, declining labor-union memberships, and the corporate culture of investor pleasing and huge bonuses.

Meanwhile, the social sector has become confined to the margins of society only, solving specific problems (education, health) outsourced by the state and multinationals –Drucker calls them “parachutes”– yet dependent on subsidies, grants and charity for survival. The result? Many separate NGOs competing for funding.

Drucker believed that the social sector is our greatest hope to again create responsible and active citizenship, but not in its current form. He called for professionalization of the social sector, through sustainable business models and professional management, and socialization of the private sector, making social bottom line an integral part of their business model. According to Drucker, profits should not be the goal. They are mere indicators of how business were doing in producing human value in terms of goods and services.

“The bottom line of every social sector organization is changed lives.”

Fast forward twenty-five years. It seems that Drucker’s vision has begun to materialize. The startup scene is booming with social enterprises popping up everywhere. Meanwhile, large businesses are starting to realize that long-term prosperity depends on triple bottom line values – serving people, profit and planet. Philanthropy is changing and social impact investors are looking to fund such enterprises. Even states have started experimenting with bottom-up innovation by founding incubators, accelerators and offering new funding in their quest to become international hubs for startup innovation, and new social business models.

Major challenges remain: some experts warn that despite the rising number of social enterprises, none of these initiatives are scaling, thus undermining the social sector’s potential at wide. There still appears to be a need for more cohesion between the various actors, better definition, and new legal provisions to support the emerging social sector.

According to Zero Marginal Cost Society author Jeremy Rifkin the biggest changes are yet to come. He believes we’re moving towards a zero marginal cost society, and fundamentally changing our socio-economic and political structures. This society will give rise collaborative commons, going far beyond current social sector developments.

Towards a zero marginal cost society

Looking back at history, Rifkin states, great societal transformations have always coincided with radical innovations in communication and energy provision. During the First and Second Industrial Revolutions, huge investments were needed to build national communication networks and enable localized oil and gas extraction, production and transportation. “This required huge influxes of financial capital and vertically integrated enterprises and centralized command and control to achieve economies of scale – putting the economy in the lap of capitalism, aided by government.”

The unfolding Third Industrial Revolution is driven by social capital and facilitated by the Internet. The Internet is reducing costs in all areas of economic life, can scale laterally, and is organized in distributed and collaborative fashion. It also coincides with the introduction of renewable energy which can be generated anywhere, or shared through smart grids.  The Internet has become the “global virtual public square”, inciting people to share music, videos, photos, and news. Much like media and communication before it, all sectors of society will be transformed as a result of a global technology platform: the Internet of Things.

“Billions of sensors are being attached to natural resources, production lines, the electricity grid, logistics networks, recycling flows, and implanted in homes, offices, stores, and vehicles, feeding Big Data into the IoT global neural network,” says Rifkin. Everyone will be able to make use of these data streams to increase efficiency and productivity, lowering marginal costs to near zero. “They will be free, just like we now do with information goods.”

Emerging disruptive technologies, such as 3D-printing, can lower costs significantly by decentralizing manufacturing worldwide. MOOCs – Massive Open Online Courses – are opening up new educational opportunities for students everywhere. Or what about Bitcoin technology, and its potential to disrupt the financial sector?

As Rifin says: “the linking up of every human activity in an intelligent global network is giving birth to a whole new economic being.” The future will be one of abundance, overcoming our traditional economic principles of scarcity and added marginal costs – to everyone’s value. Privately held knowledge and resources will be “produced and exchanged across an unrestricted and flee-flowing lateral Commons at near-zero marginal cost.” Internet communication and renewable energies “form the inseparable matrix for a foundational infrastructure whose operating logic is best served by Commons management.”

Already, the struggle over Internet governance and network neutrality is being waged between government, big enterprises and citizen stakeholders. Until now, the Internet has been managed as a global Commons, with three primary stakeholders governing its common infrastructure. However, this situation is unsustainable on the long haul, Rifkin says. The current model of Internet platforms is that 100% of the value added is created by users, but captured by the platform owners. “This ‘value crisis’, where no value flows back to the value creators, clearly show that it is a transitional model, not bound to last.” Capitalism cannot function like this. People will not allow for this. Just think about the backlash that companies like Facebook and Google are facing for selling private data to pursue their self-interest.

Meanwhile, Rifkin says, government is stuck in the middle “attempting to serve two masters: one dedicated to a capitalist model, the other to a commons model.”

Nowhere does this struggle become more apparent then when looking at younger generations. Poised to become the largest living generation in history, the Millennials (born between 1990 and 2000) are increasingly critical of both large multinationals and big government. Critics say it is a generation defined by contradiction: they are more liberal, yet in favor of small government. “They are deeply confused about their politics”, says a recent Atlantic article. Is this true? Or are they just opposing the way society’s been run this past century? Coming of age in the post-financial crisis era, with Internet at their every disposal, they are the “most [educated], most globalized, collaborative, transparent, individual, socially active” generation ever. They live online, sharing stories, knowledge and resources, and collaborating away. And they are demanding change – in the way politics, public institutions and private organizations are run.

So what will happen? According to Rifkin, society will re-orient itself around collaborative commons: where resources and profits are held, managed and shared. “Cooperatives are the only business model that will work in a near-zero marginal cost society.” Commons are for-benefit, democratically run associations. They are driven by cooperation and broad social commitment. Everyone contributes equitably and democratically to the capital of their cooperative, which then becomes common property, and members jointly decide how it should be used.

First, Rifkin believes, we will enter a period of transition: giving rise to a hybrid economy – part capitalism, part collaborative commons. Business enterprise is likely to “remain with us far into the future, albeit in an increasingly streamlined role, primarily as an aggregator of network services and solutions”. But they will co-exist alongside collaborative commons, likely to emerge as “powerful partners” in the decades to come. “The financial sector will also play a critical part in the collaborative age, funding the build out of the Third Industrial Revolution Internet of Things infrastructure. The capitalist market, however, will no longer be the exclusive arbiter of economic life. We are entering a world partially beyond markets where we are learning how to live together in an increasingly interdependent global collaborative commons.”

Seen in this light, companies like Uber may just be transitional organizations, which will ultimately pave the way for local and truly collaborative commons: operating on a city level, co-managed and jointly owned by users and local stakeholders. This may seem like utopic idealism but it is already happening everywhere. There are over 30,000 cooperatives in the United States alone with over 100 million members, and more than 1 billion people are members of cooperatives globally. The cooperative moment is on the rise, touching all sectors of society: think modern energy cooperatives, community banking initiatives, agricultural co-ops, collaborative housing, retail and insurance solutions. The list goes on and on. According to Dew, “the coupling of the cooperative model of Commons management with an IoT infrastructure […] will enable more efficient production and equitable distribution than ever before.”

A large experiment with commons management to date is currently being conducted in Ecuador, taking a commons approach to national governance. They want to create a FLOK Society to “[transition] away from [its] extractive, oil-reliant economic model toward one that is based on open and shared knowledge.” Collaborative commons in the various sectors of society will support free, unrestricted flows of knowledge and information. According to Xabier Barandiarian, “it won’t be possible to transform our current power structure, to build a fair and sustainable societal model, or to design a new model for integrating with the global market using a neoliberal, social-democratic, or “developmentist approach. But it will be possible using the commons approach, which provides post-capitalist logic for transformation.”

Drucker envisioned a future where socially beneficial organizations would characterize all economic activity, and with it create a sphere of effective citizenship that would give people a renewed sense of community, purpose and direction, and the ability to perform and achieve. As Rifkins predicts, the Internet and emerging technologies might make this possible – we “just” need to find a way to govern this jointly, and to the benefit of all those involved. Societal governance through collaborative commons might get us there.